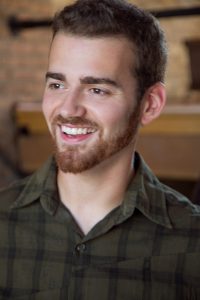 Equally well-versed in classical and jazz styles, Nathaniel Adams is a New York-based baritone originally from St. Charles, Illinois. He sings regularly with The Saint Thomas Choir of Men and Boys, the New York Philharmonic, Musica Sacra, Clarion Music Society, Pomerium, and many others.

In addition to his active performance career, Nathaniel is also an accomplished choral composer, with performances of his works all across the USA including premieres at Lincoln Center (Alice Tully), Fourth Presbyterian in Chicago, and both NCCO and ACDA conferences (regional and national).

In addition, his works have found their way into the international choral scene – with performances in Canada, China, Colombia, Indonesia, Sweden, Switzerland, and Venezuela. He holds the position of composer in residence with the St. Charles Singers (Jeff Hunt, director) and has received commissions from groups such as the St. Thomas Choir of Men and Boys, the Manhattan Chorale, the Greenwich Choral Society, Cantamus of Iowa State University, Ringmasters, and The World Youth Choir.

His compositions are published through Walton Music and Gentry Publications.