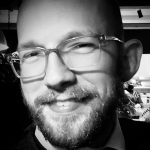 Hailing from Augusta, Georgia, bass Ian Prichard began singing in his mother’s Cherub Choir and in the Augusta Children’s Chorale. During his years in the Grammy Award-winning Davidson Fine Arts Chorale, Ian chose to follow his musical roots and attend University of South Carolina to study music education and vocal performance. While there, he performed with Opera at USC, the Carolina Alive jazz ensemble, and the University Concert Choir, in which he had the privilege to tour Bach’s B-minor Mass in Segovia, Salamanca and Madrid, Spain as well as performing the roles of Mr Gobineau in The Medium, Mr Jenks in The Tender Land, and Maximillian in Candide.

Immediately following his Bachelor’s studies in 2014, Ian uprooted from the South and moved to Chicago to study voice performance with baritone Richard Stilwell at Chicago College of Performing Arts. While there, he performed the role of Seneca in Monteverdi’s L’Incoronazione di Poppea as well as several one-act opera roles.

Since coming to Chicago, Ian has had the pleasure of performing with Chicago Symphony Chorus, Grant Park Symphony Chorus, Music of the Baroque, William Ferris Chorale, Bella Voce and Constellation Men’s Ensemble.